Challenges for People with Disabilities persist

An official of the Dar es Salaam based Comprehensive Community Based Rehabilitation in Tanzania (CCBRT) was left perplexed one day as he entered a shop at Karikaooo, Dar es Salaam.
From nowhere a woman gave her him a 200/- coin apparently as alms to a ‘poor person.’
He humbly took the money and went on with shopping. In the presence of the woman who gave him the 200/- coin, he took 400,000/- cash from his pocket and bought a music system to the surprise of the woman.

It was not his first time to encounter such mishaps. He one day went for an interview in an office in Dar es Salaam. He was repulsed at the reception by being told that he came the wrong day because it was not the day to give alms to beggars.

It was not until he told her that he was called for an interview, that the receptionist allowed her in with apology.

Fredrick Msigallah (43) a master’s degree holder is an Advocacy and Capacity Building Officer at Comprehensive Community Based Rehabilitation in Tanzania (CCBRT). 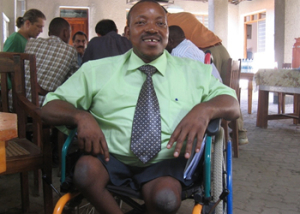 His disability is actually the effect of polio at the age of five. Although his parents tried to find treatment for him in various hospitals, it all was in vein. So they decided to accept the reality.

His success has been much contributed to the great support from his parents and relatives who saw him as just an ordinary person other and provided him with every basic need particularly education. He is now in a frontline fighting for the rights of people with disabilities (PWDs).

Persons with Disability Act, 2010 defines disability as the loss or limitation of opportunities to take part in the normal life of the community on an equal level with others due to physical, mental or social factors.
And a person with disability is a person with a physical, intellectual, sensory or mental impairment and whose functional capacity is limited by encountering attitudinal, environmental and institutional barriers.

In Tanzania, it is estimated around 4.5 million people live with disability. For decades PWDs face myriad challenges such as abuse, lack of education, illiteracy, and unemployment and despite the available international law and national laws that protect their rights, the implementation of such laws is at a very low stage.

Just recently, CCBRT conducted a one day journalists disability awareness training in Dar es Salaam where a lot of issues regarding the rights of PWDs were discussed and in the end the journalists were asked not only to be sensitive when reporting about PWDs but raise awareness to the society that PWDs are like other people, they are the part of the society and should be given equal opportunities in all spheres of life.

The training was centered on four main things including society’s perception, myth and misconception on PWDs; language regarding PWDs; disability policy, legislation and international law on PWDs; and the role of media in promoting and protecting the rights of PWDs.

Another CCBRT Advocacy Officer- a lawyer who is also a person with visual disability, Amon Anastaz said due to negative perception on disability, PWDs face challenges as denial of employment, economic marginalization. They are regarded as people who cannot contribute to anything, are dependent, and always wait to be helped.

Additionally, many parents prevent their children with physical disabilities from going to school due to myths and misconceptions on disability which on the other hand is the main cause for disability since various communalities consider it as a result of witchcraft and take their disabled children to witch doctors and as a result of late medical assistance. The problem becomes resistant to treatment and hence disability.

The same reason of negative perception towards PWDs, Msigallah said, has much contributed to negative language regarding PWDs which is commonly used to refer when speaking whether to PWDs or about them.
He said that people are calling them using humiliating names such as nutty, bound on wheelchair, blind, mute and so many others and sadly even the media use the same words to report on PWDs.

On the part of disability policy, legislation and international law, Msigallah said Tanzania is a signatory to the United Nations Convention on the Rights of people with disabilities (UNCRPD) and also various policies and legislations in the country have been adopted but the PWDs are still facing many hardships.
He said that the National Policy on Disability of 2004 and the Persons with Disabilities Act of 2010 form a good foundation that manages all issues regarding the rights of PWDs.

However, the implementation faces many challenges, threatening the rights for the PWDs.
The officer noted that the two laws categorically emphasize on the equal rights to education, health services, employment, information and communication, cooperation in economy, respect, ability to reach all areas and good standard of life.

But such rights he said are not fully given to the people who are physically challenged. PWDs are still facing challenges in various issues concerning their welfare especially education. According to the officer there is insufficient equipment to facilitate the PWDs to study.
Anastaz added that PWDs do not enjoy the right to information and communication as they lack the equipment and translators to assist them.

They also face challenge in accessing health services as they usually get humiliated by health providers, while health centers’ infrastructure pose obstacles for them to reach the areas.

The report: Employment of persons with disabilities in Dar es Salaam Tanzania conducted by CCBRT to assess the proportion of employed PWDs in education, health and private sectors indicates that among all 24,552 teachers surveyed from all learning institutions in Dar es Salaam, Mara, Lindi, Mbeya, Singida and Tabora only 519 equivalent to 2.1 percent were PWDs.

The report also indicates that there is gender imbalance of employment opportunities to PWDs as men with disabilities are more employed than that of their counterparts and that the working environment are not friendly to PWDs.

The report finally suggested and recommended that the government should go beyond enactment of legislations on employment of PWDs through intensifying awareness raising efforts towards disability policies and legislations to public and private sector’s employers as an attempt to encourage them employ people with disabilities (PWDs).

PWDs should be encouraged to apply for formal employment opportunities and that there should be gender equality.

All working barriers such as lack of lifts and ramps in office buildings, equipments, and reliable transport to and from the office should be removed and companies should be sensitized to have disability policies and legislations in workplaces that oversee the employment of PWDs and penalties for those who do not comply with them must be formed.

The law is there and so are numerous regulations that seek to ensure PWDs are always given due recognition and equal right in accessing public facilities, but the most important thing is how the society perceives them and caters to their needs. This is about setting in process a turnaround in mindsets, so that the people with disability in our midst do not feel left out or held down by their disabilities.

Media should be in a frontline on this. The society too should realize that PWDs are part of the society; they also can contribute the same or even more in the society development if given opportunity to education and empowered to work.

“When my family took me to school there were some discouragements from my community, they were even telling my dad to not waste his time and money taking me to school as I will just be useless but thanks to my dad, he never listened to them but kept on paying for my studies and was always there to support and encourage me”,
“I have completed my studies, I have a very good job, I am really very happy because as for now I am the one who provides basic needs to my family and I am now supporting my younger brothers and sisters who are not disabled for their education. Actually, now the villagers are going back to my father and saying: “We are sorry, we were wrong, you have done a great, great thing in supporting this guy to this level”.

“So my daddy sees me like oh, you are everything now, and I am proud of that, because I was dreaming of that – to be able to support not only my life but also the life of my family members and that’s what I am doing now. I am happy about my life and I feel proud to be part of those people fighting for the better life of people with disabilities and that is what I would like to see in the near future, that many people with disabilities have their rights”, Msigallah said.